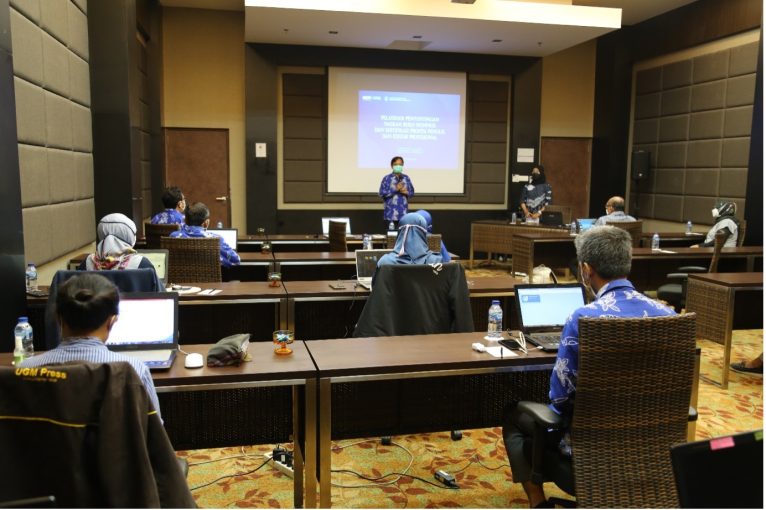 Badan Penerbit dan Publikasi Universitas Gadjah Mada (BPP UGM) which manages publishing and printing activities at UGM press organized “Non-fiction Script Book Editing Training and Professional Certification of Writers and Professional Editor” for the UGM Press editorial team on 29th-30th March 2022 at Eastparc Hotel, Yogyakarta. This event was attended by 15 participants who are the editors of UGM Press and want to improve their competence in editing manuscripts according to the designated standards, identifying weaknesses and errors in manuscripts, applying editing aspects, and performing mechanical editing in book manuscripts that UGM Press will publish. In addition, participants received a certificate of professional competency for writers and professional editors from the appointed Professional Writer and Editors’ Professional Certification Institutions.

The training presented speaker from the Institute of Indonesian Writers, PT Inkubator Penulis Indonesia, Central Jakarta, Bambang Trimansyah, S.S. and Epik Finilih, S.Si., and two assessors from Lembaga Sertifikasi Profesi Penulis dan Editor Profesional, Dr. Sriyanto and Sabjan Badio, M.Pd. The Head of BPP UGM, Prof. Widodo, S.P, M.Sc., Ph.D. conveyed in his speech that there is an urge to improve the ability and competence of writers and editors at UGM Press, one of which is through training. Besides, competency tests that are also held during the event can be a leading way for other academic civitates of UGM to receive training and professional certification of writers and professional editors from Lembaga Sertifikasi Profesi Penulis dan Editor Profesional.

Test for Certification of Profession Writer and Professional Editor was conducted with two methods, portfolio and competency test attended by all training participants. The competency test is conducted as a part of BPP UGM’s efforts in maintaining and improving the quality of academic book script editing at UGM Press. Thus, the competence of the UGM Press editorial team can be improved in terms of quality and professionalism. [Harman]